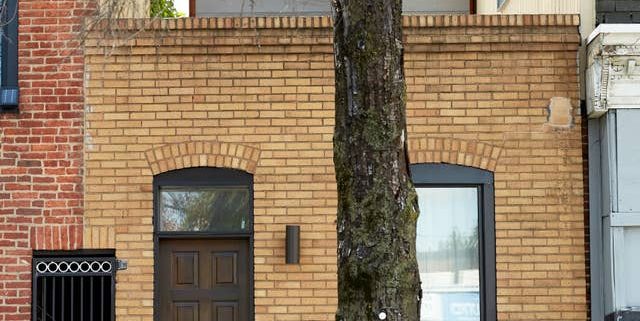 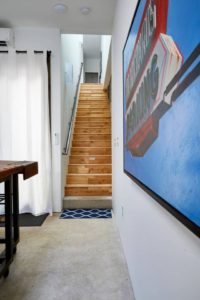 Sam Lacombe is a Baltimore based painter. His work is highly detailed and highlights everyday experiences through replication of street signs.

We purchased E1507 in July of 2016 from our neighbor, Alan Shapiro. To call it a shell would have been generous. The roof provided no shelter, and the floor gave no support. It was not a space to enjoy life.

We are not positive on the history of the building at this point, that story will come in the future.  An original structure on the property was likely built in the late 19th century. While renovating we found a foundation approximately at the front wall of the courtyard or 25 feet from the front door. The back portion was likely added in the early 20th century. The building had evidence of a fire which may have caused weakening of the beautiful timber roof and floor joists we removed during demolition 🙁 A few of the lovely planks live on in the Union Collective about 4 miles from E1507. The Baltimore Spirits Company repurposed several for their tables, and Well Crafted Kitchen used a few in their sign.

The home was one story structure of fairly standard design, albeit not in all of its glory. It had three steps leading up to the door and typical eightish feet ceilings. There were two larger spaces with a bathroom where the stairs are presently. We preserved some of the beautiful brick work on the interior wall in the studio. If you look near the wet bar you will see “newer” brick and mortar where Alan had made a doorway to his larger studio space next door. One of our favorite accents in the place is the layers of plaster and paint on the original brick wall of the new stairwell.  Also, if you look at the wall in the courtyard you will note a “doghouse” at the roof line. There were stairs along that wall that suggested an intention to build a second story in earlier days, again this is only speculation at this point.

Alan’s family had owned the property for the past four decades. In most recent years, the building had served as an extension of his cabinet making studio. Like many creative spaces, it was filled with material. Some of the contents could still spark joy, much of it was detritus of ideas yet to be executed. We spent six months working with Alan clearing the space for its future and working with PI KL (PIKLSTUDIO.com) to come up with a vision.

Pavlina Ilieva and Kuo Pao Lian, the architects, were the perfect talent for our project. They saw constraints as friends. They knew aesthetic had to support function. They believed details made for big impact. They appreciated how the melding of history with modernity was a place for magic in the moment to happen. They were ideal to collaborate with on a space to marry cultural production, and appreciation, with everyday life.

We live just around the corner from E1507 and had been doing AirBnb in the guest bedroom of our home for several years prior to our purchase. We made a financial investment based on the notion of short term rental use. However, Scott  runs a talent agency (burkholderagency.com) He envisioned the space as a place to show audiences and artists how humanity might live with art. He wanted to experiment with his theories on building relationships between creators and wonderers and the value ALL humanity might experience by surrounding themselves with objects of meaning on a daily basis.

The location on Eastern Avenue is rift with opportunity. The corridor is a prominent east west artery in the city. The architecture along the avenue shows that throughout history it has been a place for businesses and residents alike. It has the grand qualities and bones to be an important asset for a world class urban center.

We wanted our space to support the potential of the future. Although it is presently serving as a home, we can imagine the space being used for commercial purposes. We wanted the layout to be simple and non-confrontation to future spatial visions.  We can see a day when a fashion designer loves the natural light or a small office enjoys the open airy feeling or even a bistro serves delectable coffee in the courtyard!

In the present, to provide optimal return on the financial investment, we contrived a space that could host a spectrum of interests. We designed with the intent of two private spaces; one like a traditional hotel room with bed, bath and wetbar. The other like a one bedroom flat with; living, dining, full kitchen, bedroom, bathroom and laundry. A guest could also rent the entire building offering reasonable accommodations for up to 6 people, if a couple is inclined to sleep on a comfortable fold out sofa bed.

The “studio” would be perfect for an inexpensive one night get away for a couple wanting to experience Baltimore. The apartment would be a wonderful place for guests to call home away from home during a longer stay near circumstances of life. The entire building would work well for a group to celebrate a life milestone with friends.

Kuo Pao had always wanted to place a courtyard in the middle of one of Baltimore’s tiny row houses. The typical design for 14 foot wide properties that are 80 feet deep is to place the outdoor space at the back. By positioning the exterior space in the center we exposed a new source of light, lots of light! The mid-building location also provided us the opportunity to utilize the small alley way as a private entrance to the studio space.

The historic “charming” homes of Baltimore are often quite narrow. To overcome the squeezing sensation we made the bold decision, as we had no roof to hold us down, to make the ceilings ten and a half feet high! The height, coupled with natural light from the courtyard and 4 skylights, make the space free and airy.

Talent is all around us! The simple layout needed several aesthetically pleasing finishing touches. There is no trim work in the space. Our builder (Santiago Baten) was a craftsman and took pride in delivering our clean lined vision. Peter Machen (machenart.com) is a sculptor whose medium is metal. He kindly took on the overly simplistic task of creating our unique door frames. They are ¼ metal sheets cut to width: industrial strength and industrial weight but only visible when actually looking at them. The bathroom doors were produced by Chris Zickefoose (chriszickefoose.com) He made a few mundane floorboards harvested from the building during demo into lovely sliding works of art.

The table in the one bedroom apartment took a lifetime to make. It was Alan’s workbench. He crafted his works of wooden wonder for over three decades on the surface. It has all the beauty marks of serving a maker faithfully and continues to share her character with our guests. The base was constructed by Garrett Bladow a 21st century renaissance man.

Want to join the discussion?
Feel free to contribute!

E1507: Philosophy of the space

Mental Prowess Part 1: Stop and Think, you don’t have time not to Scroll to top